I used to run a site that did nothing but CD reviews.  I loved it at the time and I had more time to really keep up with it and dig in.  Also, I wasn’t faced with the glut of music that I am now.  Yes, I’m complaining that I have too much music to listen to.  Heck, I have too much media, too many e-mails, too many blogs to read and a family that likes to see me from time to time.  So, my music time is a bit limited.  I really have to make the stuff that I listen to count when I give myself the chance.  Most of the time that chance is in the 20 or so minutes each way to and from work.  Even that won’t let you listen to a whole album back to front.  So, it really takes some good tunes to cut through the pack and rise to the top.  The two discs below have begun to do just that and deserve mention here.

The first disc I’d like to talk about is Doves Kingdom of Rust.  This is a solid Doves effort with a little more energy than their last album.  There is a sense of experimentation and even references a bit of 1960’s production on songs like “House of Mirrors.”  Still, the album manages to walk the line between spacey, arena friendly, and sincere without spreading itself too thin.  Doves are an excellent British band in the vein of Elbow and (sigh) Coldplay with way more talent (in my opinion) than the latter and almost as much as the former.  If you’re a Doves fan, you should have this already but if you’re not, this is a pretty good one to start with. 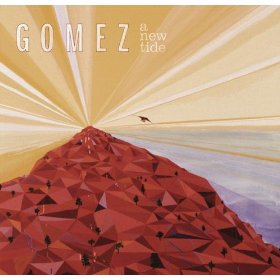 Number two on my list of albums that have caught my interest is Gomez’s A New Tide.  I have to admit, this one was a sleeper for a few weeks.  I never gave it a full chance.  But after a few focused listens, it really revealed itself.  This wouldn’t have sounded at all odd being their third album after the lauded Bring it On and Liquid Skin.  There’s some really good electronic stuff gurgling under the sparse acoustic instrumentation and gentle vocals on this disc.  They’ve rediscovered their ability to surprise the listener in different parts of the song.  There are actual peaks and crescendos this time out and none feel contrived as they may have in the past couple of discs.  Undoubtedly, the band have mellowed and they would probably deserve the “dad rock” moniker being thrown about in indie music circles but, as a dad, I don’t see that as a bad thing.

Check ’em out here and here.