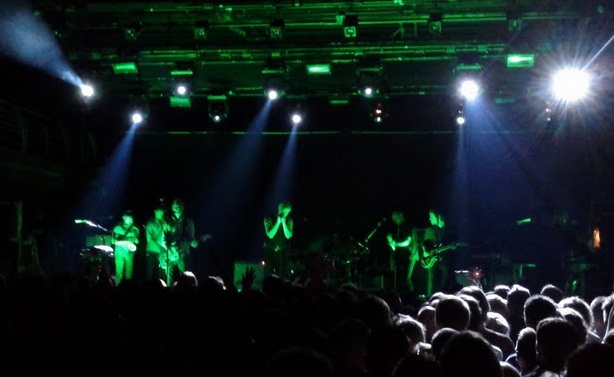 Wednesday night, Brooklyn’s The National took a brief break from their European festival tour and played the Archa Theater in downtown Prague.  The Archa is a great venue and reminds me of a compact version of DC’s legendary 9:30 Club.  When great bands like The National come to Prague to play, I love the place even more.

The National put on a solid, dynamic, atmospheric show from the word go.  Beginning with the muted “Runaway” they played a sampling from their past four albums plus the new “Exile Vilify.”  The National aren’t a “mosh pit” kind of band so there was a lot of vigorous head nodding and toe-tapping during the set.  That said, songs like “Mr. November” and “Mistaken for Strangers” elicited some serious crowd sing-alongs and a generous serving of fist-pumps from the mellow Czech/expat crowd.

The band obviously enjoyed itself and sprinkled its set with amusing stage banter.  Lead singer, Matt Beringer channeled his inner-1908’s Bono and descended into the crowd on two occasions for a sing-along – side by side with the people who had come to see the band.  The second time it happened, it was during the acoustic guitar adorned (and microphoneless) “Vanderlyle Crybaby Geeks”, a song that up to that point, I hadn’t paid much attention to.  The tune definitely benefited from the stripped down and up close and personal treatment.

The band really delivered at this show.  They crafted a perfectly paced setlist with just enough crescendo to keep it interesting all while keeping their dark, moody melodic groove intact.  It was great to see one of America’s best bands conquer one of the capitals of Europe.