There are certain places you hear about in the world that you almost feel like you know even if you have never been there.  Names like “Paris” and “Rome” bring up images of the Eiffel Tower and Coliseum respectively, right?  Of course, when you picture, “Pamplona” you picture the running of the bulls, correct?

I thought the same thing up until a couple of weeks ago when the family and I had the good fortune to make a slight alteration to our northern Spain journey and dip into Pamplona for the day.  It was a last-minute decision on the way to San Sebastian and ended up as one of my favorite surprises of the trip.

As it turns out, there were no bulls in the street (despite Little NH’s imagination) but the streets were filled with great restaurants and the plaza mayor was sun-soaked on this fall 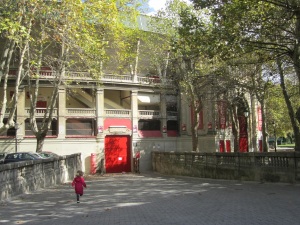 afternoon.  The old town of the city is warm and hospitable.   The food, as in all of Spain, is top-notch – even in the touristy areas.

Pamplona’s biggest claim to fame isn’t hidden away, however.  Along the streets that make up the 826 meter “encierro” to the Plaza de Toros, are signs that demarcate the path that the bovines take, hot on the trail of targets for their sharp horns.

I don’t know about you but I prefer to find my surprise in the charm of the city rather than the surprise that awaits some poor runner on a sunny day in July – particularly if it comes at the ends of the horns of a bull.