This has been an incredible and eventful year for music.  We’ve lost several superstars including one of the greatest musical personalities of all time in David Bowie.  In positive news, my childhood hero, Sting, has come back to the pop music scene after a decade in the lute filled wilderness.  Out of nowhere, Iggy Pop’s late-career masterpiece has led me to gobble up the rest of his discography and left me wondering how the hell I missed it the first go ’round.

Some consider 2016 to have been one of the worst years ever.  Of course, I think that’s impossible to say without some distance.  The losses in the music world were sad but we gained some promising new blood in a little band called Car Seat Headrest.  But for me, this was largely a year of the old pro’s being on top of their game.

This is also the year that my girls declared their favorite bands.  For my oldest, it’s the Beatles.  For my youngest, it’s Iggy Pop.  Unless you know my kids, you don’t know just how fitting that is, nor how happy it makes me.

OK, onto the list.  Like last year, this will be in several installments.  Let me know what you think in the comments.

The DBTs get political here.  About the last thing I needed in my life was more politics.  Don’t get me wrong, the writing is pretty sharp but what’s missing are the fun character sketches of the Truckers’ previous albums.  I don’t mind politics in music but a lot of this just comes off as preachy.  But the red vinyl is cool.

The third in a trilogy of sorts for Mould, “Patch the Sky” is a solid latter day Bob Mould record.  That said, it’s not much more than that.  Nothing really sticks out on it.  Or, maybe after 3 records of superb Mould craftsmanship, I’ve started taking him for granted.  Either way, a solid Mould album trumps one like “Modulate” so I’m not complaining.

I should really be forced to play this record every time I miss church.  The whole thing sort of reminds me of the one time I went to a Southern Baptist church service in rural Texas.  Something about all of the hellfire and brimstone really appealed to me.  The same thing happens with this record.  Something about recognizing and coming to terms with our flawed nature as humans has always had an appeal.  Parker Millsap nails that mood on this record.  If sinning and redemption had a soundtrack, it might well be this record.

Am I taking Andrew Bird for granted?  That could be.  This is a good album and the duet with Fiona Apple is a real standout.  Otherwise, it’s just a good, solid Andrew Bird record.  Is there really any other kind? 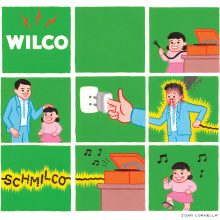 This album grows on me a little bit more with every play.  But it’s far from one of their best (a tall order) and the cover is just awful.  I think I may not have found the right mood to listen to it.  It’s notable that the only song that rocks is “Locator” and “Common Sense” is absolute garbage.  A close cousin of Tweedy’s solo debut, I can tell there’s something in this but can’t yet decide what it is.  Confused?  So am I.

First off, when I was a kid I had Sting and Police posters all over my room.  When I listen to a Police record, I get the same type of feeling that I got when I first heard “Don’t Stand So Close To Me”.  So, I’m a fan.  That’s why I was so happy to see Sting come back into popular music.  His first effort in over 10 years in that vein is no disappointment.  It’s a solid Sting solo album.  It’s hard to say where it ranges in his solo canon but it faces some stiff competition.  That said, he pulls off some very difficult political commentary without sounding preachy.  He tackles global warming and the refugee crisis and I don’t get the urge to skip the songs.  The writing is solid though not stellar and somehow it all seems a little aloof.  What does it compare to?  I think it’s a close relative of “Brand New Day” in feel.  Not a bad thing.  Welcome back, Sting.