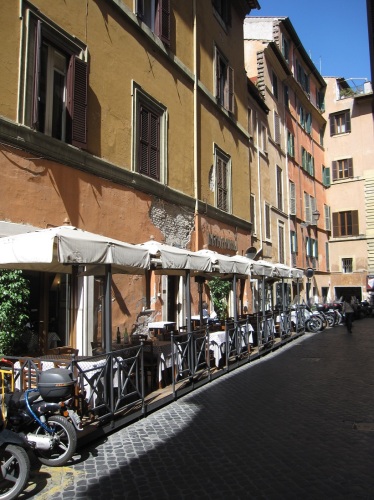 Some day in the future, when I make bazillions on some great idea that I have in the middle of the night, I’m going to buy houses and apartments all over the world.  One of them will be in Rome and it will be just down the street from Matricianella.  Not because the neighborhood is any better than any other place in Rome, but because I know Mrs. NH will want to go there all the time.  At least if I have an apartment near it, it won’t take long to get there.  Not to mention the fact that I’d hate to miss a meal there.

Matricianella is nestled in a side street just down the way from the Spanish Steps and features a steady yet unobtrusive promenade of scooters and delivery vans just off its skinny front deck.  What happens on the other side of that deck, however, is the creation of some of the most delicious, classic, Roman food I have ever witnessed.  Mrs. NH discovered it in Food and Wine magazine about five years ago and we haven’t missed a stop there in any trip to Rome since.  Of course, that’s not always easy. 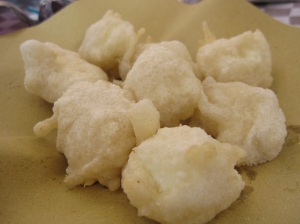 If you don’t speak Italian, good luck trying to get a reservation.  Mrs. NH tried twice.  As soon as she called and English words escaped her mouth, “Click.”  Both times.  Pshaw, I though.  She’s just not doing it right.  “Buon giorno! May I make a res…” “Click.”  So, we took our chances and walked over with Little NH hoping to score an open outside table for lunch on a weekday without a reservation.  The gods smiled upon us and we got a nice table outside.

After the reservation fiasco, I was a little worried that the previously friendly

service had been replaced by some snooty staff that hated gringos with only a passing knowledge of Italian.  My fears were unfounded, thankfully.  Service was quick, courteous and even extra sweet to Little NH.  They’re pros at Matricianella.  No wonder they don’t take reservations in English over the phone.  It is Italy, after all.

The food is rustic, hearty and not at all fussy.  It’s just excellent and perfectly executed.  We started out with the fried ricotta and bresaola salad.  The fried ricotta was like eating little pillows of pure epicurean pleasure.  I had never had the dish before but I intend to never miss it on a menu again in my life.  The bresaola was elegant and perfect, served with a good slab of lemon, peppery arugula and savory chunks of parmesan.

For the main course, I had the Veal Saltimbocca and Mrs. NH had the Gnocchi alla Romana.  We ended up splitting the dishes and it was a great combo.   The Saltimbocca had a rich gravy and excellent cuts of meat.  Melt in mouth.  Mrs. NH’s pillowy pasta was amazingly rich and incredibly comforting.  Kind of like something mom would have made if she was Italian.  Just yum city.

That and a bottle of wine and we ended lunch as two happy patrons.  Little NH

didn’t fare too poorly, either.  She had penne with tomato sauce and lots of grated parmesan and she, too was in a pretty big food coma by the end of lunch.

Topped off with a little biscotti and life-giving espresso, we were ready to tackle the afternoon in Rome.  It was the perfect Roman lunch.

Now, I can’t wait to get back there.  Say, maybe the next time we go, we’ll be apartment hunting…